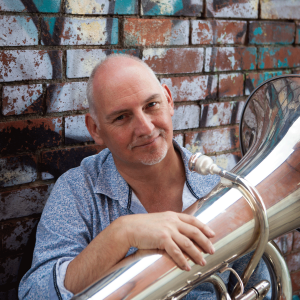 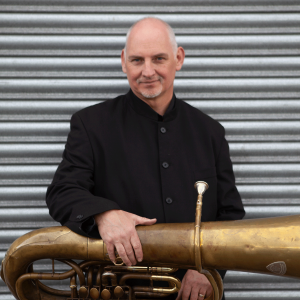 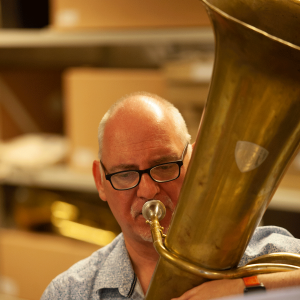 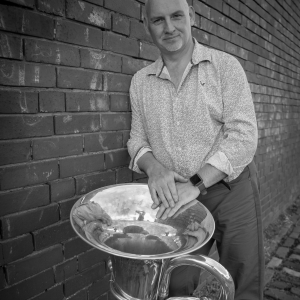 Tony George is co-Artistic Director of The Wallace Collection with John Wallace.  He has enjoyed a varied career in many different aspects of brass performing and teaching.  In 2009 he was appointed to his current position as Professor of Ophicleide and Serpent at the Royal Conservatoire of Scotland, a role which he had also previously held at both the Royal College of Music and the Guildhall School of Music and Drama.

As a virtuoso on tuba and its related historical instruments, Tony’s playing versatility has led him to perform with a wide spectrum of ensembles, on both modern and period instruments.  This includes the Philharmonia, London Sinfonietta, London Philharmonic, Hallè Orchestra, Scottish Opera Orchestra, Desford Colliery Brass Band, Scottish Chamber Orchestra, London Mozart Players, London Gabrieli Brass Ensemble, Gabrieli Consort, Orchestra of the Age of Enlightenment and Orchestra of the 18th Century.

Tony has undertaken teaching roles at the Royal College of Music, Guildhall School of Music and Drama, Royal Academy of Music and Royal Conservatoire of Scotland as well as giving master-classes at the Royal Welsh Conservatoire of Music and Drama and Royal Northern College of Music.  As a result of this broad educational experience, he has been heavily involved in music education development, working closely with Local Education Authorities, local and national youth organisations (including Sistema Scotland’s ‘Big Noise’ in Raploch), music trusts, education committees, and the ABRSM as a mentor and IT lecturer.

Acting as facilitator, leader or composer with a series of outreach educational projects, some of Tony’s most notable collaborations include those with Ballet Rambert, Edinburgh University Collection of Historic Instruments, London Sinfonietta, Scottish Brass Band Association, Scottish Chamber Orchestra, Orchestra of the Age of Enlightenment, Perth Museums Trust, Thames Brass and The Wallace Collection.

Both as a soloist, and with The Wallace Collection, Tony has given recitals in the Purcell Room, Wigmore Hall, Rudolphinium (Prague), Cité de la Musique and at various festivals throughout the UK and abroad, including concerto appearances with orchestras in the UK and Ukraine.

Tony’s specialist knowledge has led to his articles being published in the Galpin Society Journal, Historic Brass Society Journal and Music Teacher Magazine. As a composer/arranger, Tony has written a tutor book for the ophicleide (published by Wessex Tubas) and has embarked upon an ambitious project to create a playing repertory of historical brass band works from Cyfarthfa in South Wales, through his re-scoring for the modern brass band (to be published by The Music Company (UK) Ltd).