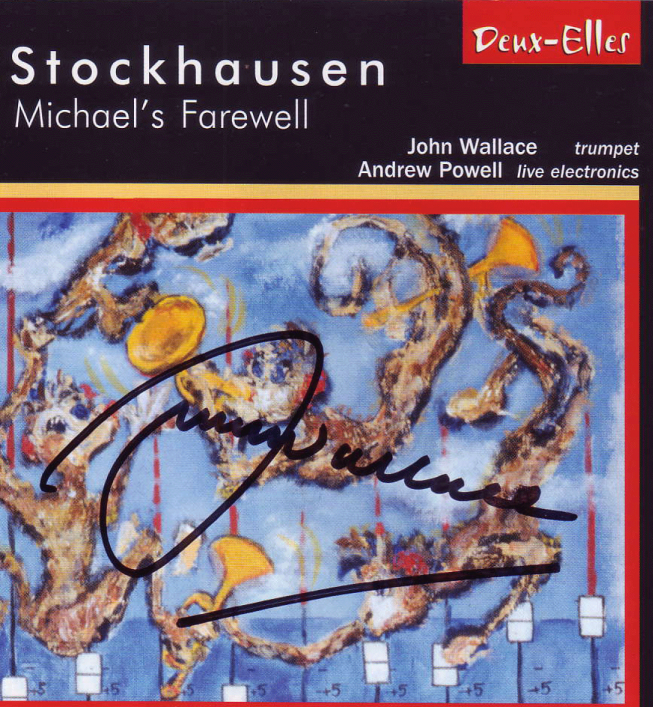 An engaging album of contemporary music for trumpet and live electronics.  Featuring works by Andrew Powell, Roger Smalley, Tim Souster and Karlheinz Stockhausen, this CD offers an exciting  variety of modern music and sound concepts which have gained renewed popularity in recent years.

Originally released in 2002 under the Deux-Elles label, the album is now owned by The Wallace Collection label and is being given a fresh new spotlight to promote this immersive music.

Two key works included on the album – Plasmogeny II and The Transistor Radio of St Narcissus were featured in the 2019 blockbuster film release of ‘Bolden’, a drama directed by Dan Pritzker, with an original soundtrack by Wynton Marsalis, which imagines the compelling, powerful and tragic journey of Buddy Bolden, the unsung American hero now hailed as ‘the inventor of jazz’.

The CD includes a 12-page information booklet, offering comprehensive insights to the music (written in English, French and German), the composers and the performers.

Commissioned by John Wallace and first performed by him and Andrew Powell in May 1999.  The work is a sister piece to Plasmogeny, (‘the development of an organism from plasma’) written in 1970 for Intermodulation. The tape part uses sounds from many sources, including Wallace’s trumpet electronically modulated: the live electronics enable the sound of the trumpet to be altered, phrases played by the soloist to be repeated, and also enable the soloist to play in harmony (up to 4-part) with himself.

The work is in 3 sections, each of which is twice as fast as, and more melodic and rhythmic than, the preceding section: the first concentrates on the low register of the trumpet, the second is more melodic, alternating between quasi-Miles Davis lyricism and explorations of the harmonic series: the third begins with fast virtuoso exchanges between the soloist and “Kodo” drums on tape, and builds to a climax with a long sustained melody played by the soloist supported by a taped brass chorale of sampled Wallace trumpets over the Kodo drums.

Echo III:
Written for Gordon Webb, who gave the first performance in July 1978.  The trumpeter stands centre-stage.  Everything which is played is recorded and played back twice, at intervals of 5 seconds (from the left loudspeaker) and 10 seconds (from the right loudspeaker).  This technical set-up gives rise to a strict 3-part canon.  The canonic effect is quite clear during the opening evolution of a staccato chromatic scale; less so during the sustained note which follows it.  Here the canonic overlappings focus the ear on gradual changes of timbre, and the movement of sound between the three sound-sources.

The Transistor Radio of St. Narcissus:
Also available to purchase as an individual downloadable track.

Commissioned by John Wallace and premiered by him in 1983.  The idea of the mirror image either in pitch or in time dominates the work, relating to the title which refers to a passage in Thomas Pynchon’s book The Crying of Lot 49, where the heroine is reminded, by the layout of a brand-new housing development (‘San Narcisco’), of her first sight of a printed circuit-board when she once opened up a transistor radio.  The shape of the work reflects the idea of revelation in a process of changing focuses on a journey down through the layers of the sound spectrum.

Michaels-Abschied (Michael’s Farewell):
Dedicated to the trumpeter Marchus Stockhausen, the composer’s son, this work is the postlude to Thursday from Light.  Premiered at La Scala, Milan in 1981 it involved players performing the work from 2 roof terraces on the La Scala building and 3 balconies around the square.  The work is shaped by each player repeating their own musical pattern (the patterns varying in length from 12-36 seconds) with prearranged pauses between each pattern and stopping at intervals of around 11/2 minutes.  All parts on this recording were played by John Wallace, using over-dubbing, with each part placed in its own echo and at a different point in the stereo sound-stage. 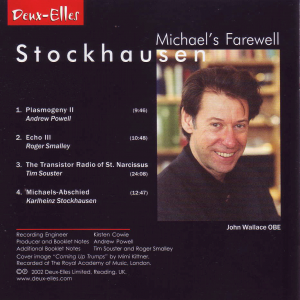 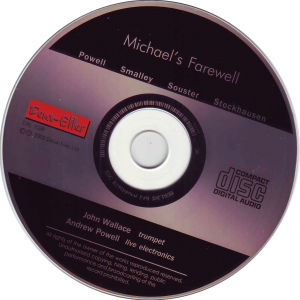